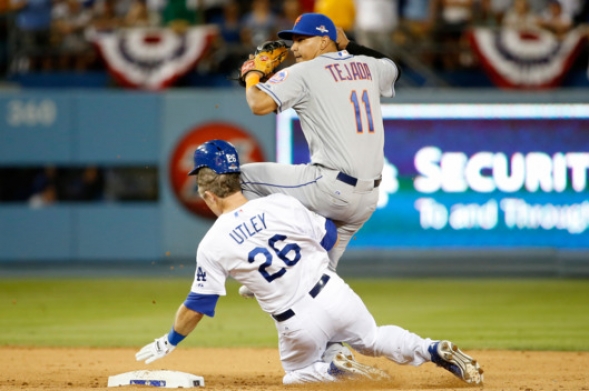 New rules in Major League Baseball for the 2016 will bring player safety to the forefront by eliminating the "take out" slide. To that I say, it's about time.
Last season, Pittsburgh Pirates shortstop Jung-Ho Kang and Chicago Cubs shortstop Ruben Tejada were seriously injured on take out slides. MLB and the players union agreed that changing the rules was necessary to prevent more injuries like those suffered by Kang and Tejada. Players union executive director Tony Clark said the goal in amending the slide rule was to "enhance player safety, reduce incidents of injury, and do it in a way that respects and preserves bona fide hustle plays that are integral to the game".
Under the new rule, for a slide to break up a double play to be legal the runner will have to make a "bona fide attempt to reach and remain on base". Contact between the runner and the fielder is allowed, but the runner cannot change his path to the base to initiate contact or engage in a rolling block. All plays will be subject to video review and if the replay shows that the runner did not engage in a bona fide slide attempt, interference will be called and both the runner and the batter can be called out.


Like this article? You should check out all our Target promo codes!
So what exactly is a "bona fide slide"? According to the rule, it has four points. The runner must begin his slide before reaching the base. The runner is able to and tries to reach the base with his hand or foot. The runner is able to and tries to remain on the base after completion of the slide. And that the runner slides within reach of the base without changing his pathway for the purpose of initiating contact with the fielder.
There is one other rule though as well that ties in with this. There will now be the capacity to review the "neighborhood play". The neighborhood play, for those of you not familiar with the name, is when an out is awarded at second base when the fielder is near the bag. Under the new rule, fielders will actually have to touch the bag to record the out. The reason for making this change, according to Chris Marinak of Major League Baseball, is because of frustration about the play due to inconsistency of how it was applied by the umpires. Marinak said he feels the net result between the two rule changes is positive when it comes to safety for middle infielders.
I agree 100% with both of these changes. While there can be some argument that an infielder actually having to touch the bag with a runner actually having to slide into the base could cause as much risk as removing the take out slide eliminates, I disagree. You're supposed to actually touch the base for there to be an out awarded. So forcing the middle infielders to touch the bag is in essence, enforcing the rules as they're supposed to be enforced. And if the middle infielder knows how the runner is required to slide, he'll be able to react and get himself out of danger.
With player safety taking the forefront in professional sports, and seeing how the NFL and the NHL have addressed the concussion issue, it's nice to see MLB take action here to eliminate a play before anyone else ends up losing a season, like Kang and Tejada did, or suffering something worse due to an injury caused by a take out slide. Kudos Major League Baseball, taking out the take out slide was the right thing to do.